I think it's time to come clean about by Winter Olympics guilty secret, and no its not the normal one about watching the figure skating, as I've already confessed to that. Although on that subject the archive footage of Robin Cousins skating to victory in 1980 was quite something, who would have thought they had flared skating outfits. No, what I've discovered is that what I really like about the Winter Olympics is when people fall over.

Now in terms of this not all winter sports are created equal. Short track skating is a top event for falling over, with competitors not only crashing out but taking much of the field with them. Team GB member Jack Whelbourne, got through his heat when two people in front of him crashed just short of the line. Even better, if you are felled by a competotor and knocked out of the race, then you are automatically advanced to 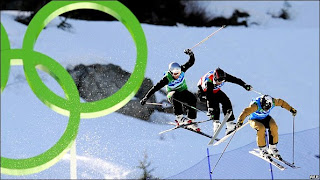 the next round! Although this can work the other way as GB's Sarah Lindsay found out to her cost in her semi-final. The mogals and ski cross, both totally crazy events, come a close second, with the added bonus that the events include jumps, which are always good fun. The figure skating also offers good oportunities for slips, and the male German clown (that is not an assement of his performance, he was dressed as one) was a good example.

My desire for crashes only goes so far, and I did not enjoy the crash of the GB team in two man bob, which looked both dangerous and terrifying, although both men were fine. (If you can't resist the desire to rubber neck you can watch the crash here). Although having said that, some of the crashes in the Ski Cross were probably just as bad, and one man at least was pulled on the course by the medics. That is the advantage of the short track skating, the edges are well padded.

So the upshot of all this? All those years of training and all I want to see is them fall over and crash out. Am I a bad person, or is this just an unfortunate truth?
Labels: winter olympics