Due to the unforeseen circumstances occasioned by my fractured wrist my Christmas knitting, which had started so well with dad's sock, was put on hold. Mostly, I decided to cut my losses (or rather my recipients) and not bothered making anything I'd not already started. But my brother's hat was already on the needles in December so I finished it off as soon as the cast came off. 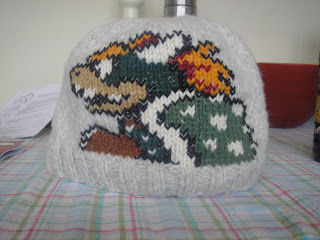 My brother is very difficult to shop for, so I decided to make a hat for him. Browsing on ravelry I found this fantastic bowser hat, just right for my Super Mario fan of a brother. I especially liked the description on ravelry for the sizes the pattern is available in - child, youth and adult, the last being 'a very large hat, for people with exceptional heads'!

The hat is made from some Avoca yarn from 2009, its DK weight so I doubled it up. I worked Bowser in scraps of tapestry wool I pinched from my mum, it looked a bit complicated to work as I knitted so I Swiss darned it on after.  This did take about twice as long as knitting the hat, but it was a quick hat to knit up so I didn't mind.  My brother tells me he is delighted with the hat, and that it fits his 'exceptional head' very well :) 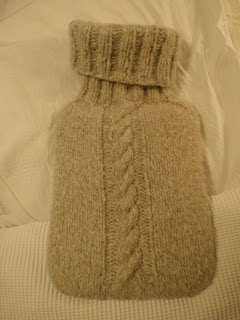 I actually finished this before Xmas, but I forgot to take a photo before wrapping it up so I'm only posting on it now. Attentive readers may notice that this is made in the same yarn as the Bowser hat. Its a very nice soft and cosy wool, and I was on a stash busting exercise. The cones of yarn from Avoca seem to go on for ages, I've already made a hoodie out of this yarn as well as these two pieces and I've still got plenty left.


So back to the cozy, I used the ISBN Cabled Pattern, working it in the round with a line of cable up the front and the back. I understand from the recipient that cozy is very effective and is still warm in the morning. When sending me the photos of the cozy I asked for, she told me that 'the best location to photograph it would be on a boat, with the white cliffs of Dover seen in the background across a rough sea. Or a quarry. It is quite the most ruggedly handsome hot water bottle cover I've ever seen.' That would indeed be quite a nice photo, but in the absence of a rowing boat and the white cliffs she settled for the cozy next to the aga warming up. 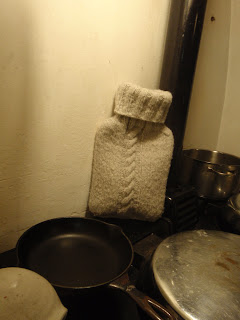