Sackcloth and Sheep's Heads, it has to be ICA Bootcamp

I have to admit that I am just a big fan of RTE's ICA Bootcamp, and this week I have been enjoying Charity ICA Bootcamp, which is enjoyable if not quite as good.

For those of you not from Ireland, ICA is the Irish Countrywoman's Association. The ICA is over 100 years old and is the largest women's organisation in Ireland, according to their website they organise a varied programmes of activity including trips and visits, crafts and art, speakers and competitions. To a large extent they are the  Irish version of the Women's Institute.

For Charity ICA Bootcamp four 'celbraties' (I don't know who most of them are) are sent to the ICA headquarters at An Grianan, where they compete in a number of tasks. Including 'traditional' women's tasks of cooking, farming, household duties, sewing and 'party pieces'. All under the watchful eyes of the three no-nonsense ICA mentors. I especially like Josephine (on the right) who over sees the sewing, and has an eye for the young men, she was very taken with Mr World last night. 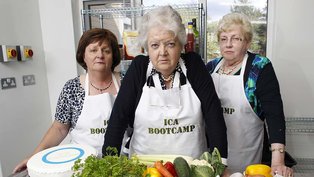 Although I enjoy the 'extreme ironing' task and the thrift cooking (last night it was sheep's tongue which had to be removed from the sheep's head first), my favorite is the sewing task. Over the week all the contestants have to make an outfit for the final day's party from some fairly un-inspiring materials. On Sunday, they were presented with sackcloth, and the results were extraordinary. 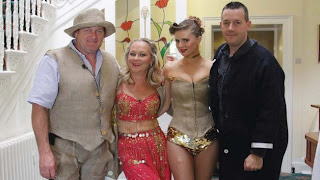 You may be wondering about the belly dancer, but she did have a sackcloth shrug. Many of the ICA ladies at the final party were somewhat nonplussed by the burlesque outfit, especially when she performed a 'party piece' which involved putting a snake's head in her mouth ... yuck!

An additional charm in this series is that the narrator seems to have hit her stride, and is very funny, although not yet up to the standard of the narrator on Come Dine With Me. He really does make that show. There are also some rather charming clips of ICA members from years gone by.

If I've managed to tempt you to watch ICA bootcamp, you can catch up now on the RTE player here.

And here is a clip from the normal ICA Bootcamp, where 'sex and the city-esque' modern young women are sent to try their hands at some traditional tasks.