At the start of this year I suggest to my best friend Miss D, that we should set ourselves a refashioning challenge. I should say here that is not an original idea, but one I have blatantly stolen from So, Zo. My suggestion was that every couple of months during 2012 we would send each other an item from a charity shop, which then had to be refashioned into a new, exciting and wearable item!

I first made the suggestion to Miss D in an email, and when she didn't get back to me I thought that she wasn't interested. I should have known better, as a couple of weeks later my first refashioning challenge arrived in the post.
This is not the clearest picture, but the item is a patterned velvet shirt, originally from Marks & Spencer. I have to confess that this shirt arrived some weeks ago, but it has taken me some time to come up with a workable idea.
My first plan was to use Twinkle Sew's Eye for an Eyelet, (below left) but it quickly became clear that there was not going to be enough fabric in the shirt. Instead I used a New Look shirt patten from my stash to remodel the body of the shirt into a closer fitting shape, keeping the button bands from the original, and shorted the sleeves (view E on the pattern packet, below right). 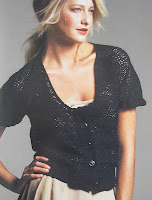 Instead of following the shirt patten completely and making a standing collar, I instead when back to my original idea and copied the neckline from Eye for an Eyelet. And here is the result ... 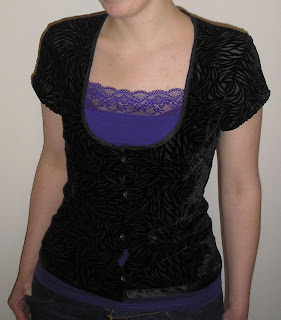 Despite a few false starts, and a mid-project wobble, I really enjoyed the challenge of re-working this shirt. I feel that in going for a shirt shape, and keeping the original button bands, even if it is only a small section of them, has kept some of the original aspects of the garment. I'm fairly pleased with the result, it is certainly much more wearable than the original item, and I think I probably will wear it. I need to move the lowest button, as it is not quite in the right place and is making the top gape.
Aside from what to do with the item, the fabric was a nightmare to work with. It slipped around and the difference in thickness across the fabric made it very difficult to make a neat seam or dart. This also made it very difficult to hem, and because it is partly see-through the hems need to be quite neat. In the end I finished the neck line with some bias-binding, and the lower edge with ribbon. As both came from my stash, and I reused the buttons from the original, I didn't spend a penny on this project - very thrifty. 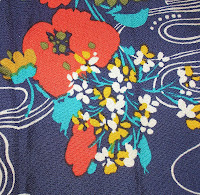 I'm now off to send my revenge, sorry that should be challenge, to Miss D. I won't put a picture of the whole garment up here, so as not to spoil the suprise for her, but I will put in this little sneaky peak.
Labels: charity shops FOs refashioning sewing