This year, for the first time, the boyfriend and I decided to get a Christmas tree for our house. We both go home to our families for Christmas so we have never bothered with our own tree before, but this year we both had some time off before Christmas so decided we would.

Having bought an Argos value fake tree (other low cost artificial trees are available) we realised we only had one decoration. The decorations in the 2euro shops were not overly exciting, except for some candy canes, so K suggested I made my own.

One of the draw back of a fake tree is that you don't get the lovely Christmas smell, so K suggested  scented decorations. Being a brewer, his suggestion for a scent was hops, of which we have a large amount. So here is what I did. 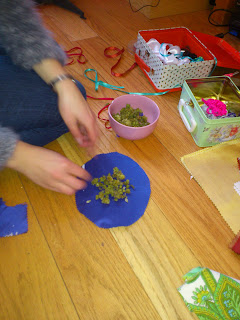 I cut a rough circle of fabric using my pinking scissors, so I didn't need to hem the edges, and piled some hops in the centre. I then pulled the edges of the fabric together to from a parcel and tied it up with ribbon. 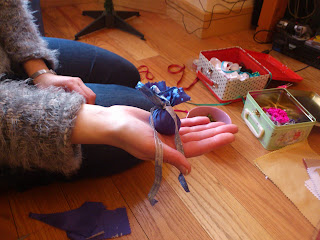 I used a nice long bit of ribbon so there was enough to form a loop to hang the parcel from the tree, and ta da ... 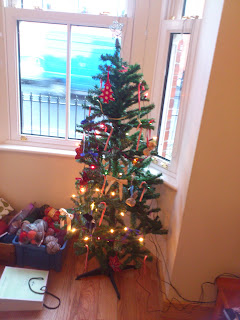 One very hoppy happy Christmas tree. Not bad for a bargain tree and some DIY decorations I think! I also used some strings of sequins as tinsel, and tied some ribbon bows straight onto the tree.

Obviously, you might not all have the same easy access to the large quantities of hops I do, but you could make the scented parcels with other fillings - cloves and cinnamon would give a nice festive smell.
Labels: Christmas decorations DIY