I had an exciting moment on Sunday while working on my blanket when I realised that it was now half of the final planned width! This was shortly followed by the second thought that if I made it for a single rather than a double bed, it would now be the correct width, but I pushed this thought from my mind. It seems a bit hard to ditch the boyfriend just so I can finish my blanket faster :)

I've also been experimenting with adding bigger squares, four times the size of the little ones. I think this works quite well, although the self-striping of the blue and white yarn, means that the second blue stripe is the same size as a small square which makes it a bit harder to judge. 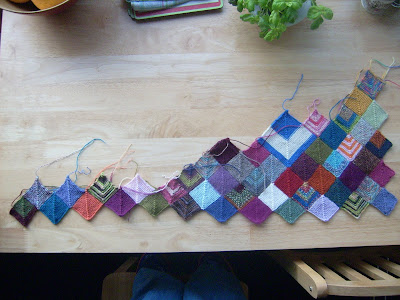