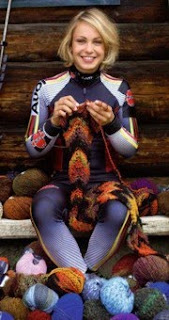 Despite being totally uninterested in sport generally, I have been enjoying watching the winter olympics. However, I was extreamly annoyed when the highlights this afternoon on BBC Northern Ireland were cut off just before the figure skating to go to a politics programme! I wanted to see the ice dancing, and the sequins.

I've particually been following the German biathlete Magdelena Neuner, every since I found out she always takes her knitting with her to all competitions. She also has a knitting website, which seems to be supported by the German yarn company Lana Grossa, where she blogs on her projects and has some knitting designs of her own. At least I think so as my German is not great, despite, or prehaps because of my GCSE.

Unfortunatly, Magdelena was pipped to gold in the 7.5km sprint on Saturday by the Slovakian outside Kuzmina, but fingers crossed for a gold tommorrow in the 10km pursuit.

UPDATE! Revenge for Magdelena in the 10km pursuit as she beat Kuzmina to the gold.
Labels: winter olympics