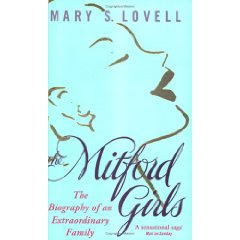 Being a huge fan of Nancy Mitford's works, I was really keen to read Mary S. Lovell The Mitford Girls. For lovers of Love in a Cold Climate and the Pursuit of Love, its fascinating to see where Nancy took her ideas from, and how she caricatured her family and friends, not always too kindly. Lovell especially tries to rescue the Mitford parents from the caricatures Nancy created of them, which caused their mother considerable pain during her life. But in looking at Nancy's life alongside that of her sisters it really is as the subtitle says 'The biography of an extraordinary family'. The Mitford sisters were deeply influence, and torn apart, by the political upheavals of the 1930s and 40s. Diana became one of the most hated women in Britain when she left her first husband for Sir Oswald Mosley, and spent much of the World War II in prison for her association with Fascism. She was eclipsed by her sister Unity who became a follower and close friend of Hitler, to the extent that British papers speculated they might marry, an association which would eventually end in tragedy. At the opposite end of the spectrum Decca, ironically the sister closest to Unity, ran off to Spain to join the fight against fascism, and would become a leading left-wing campaigner in America post war. Given the high profiles of her sister, the sixth Debo became the Duchess of Devonshire and helped save Chatsworth, Pam is perhaps the most ordinary, but also extraordinary. In Betjeman's words 'the most rural Mitford girl' she avoided the lime light that hounded her sisters, and lived a quite rural life, with an aga made to match her amazingly blue eyes!

Lovell's book is an excellent read, and although long, there very few points at which it drags, not surprising given her source material. Lovell is anyway a good biography writer, I greatly enjoyed her biography of Bess of Hardwick, and have her bio of Amelia Earhart is on my to read list. The Mitford girls is a fascinating look at an amazing family, who lived through such a turbulent time. I will certainly be revisit the Mitford oeuvre, especially Decca's Hons and Rebels which I have never read.