Inspired, as I often am, by Wellbread, and also Stoutfellow, I decided to expand my experience of breadmaking out of the saftey of yeast breads and into the world of sourdoughs. A fairly serious commitment I feel.

Using recipes from Dan Lepard's A Handmade Loaf, I start on my own leavan, a five day process which uses raisins and yoghurt to promote the fermentation in a mix of flour and water. (photos show the start of the process on day one and the 'finished' leavan on day six) 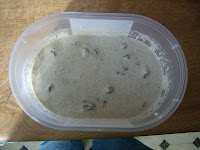 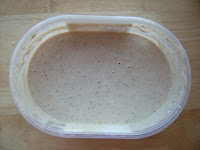 The advantage of the leavan is once it is up and fermenting, its can be continually refreshed and used again and again as a starter for loaf. I decided to start with a simple white leaven bread to see how I would get on. The dough is made my mixing the leavan with more flour and water and then a process of short burst of kneading followed by a long slow four and a half hour proving period. Not owning a proving basket I improvised one with a floured tea towel and a colander. 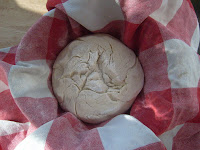 I think my kitchen, as is all my flat, might have been a little cold and I don't think the bread proved as well as it could, but nothing daunted I pop it in the oven and kept my fingers crossed.
And here is is the finished loaf ... 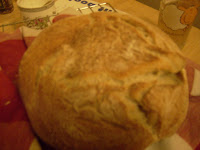 Coming out of the oven it looked and smelt amazing, and I managed to contain myself from launching strait into eating it. When I did cut it open I found there were a couple of really large holes in the middle of the loaf, I don't know why, but I'm sure someone (Wellbread) can tell me?
Despite this its very nice bread, and I'm greatly enjoying a slice now spread with my mum's logenberry jam, yummy!

As I had the oven on last night for the bread I took the opportunity to make pizza for supper, using my breadmaker to make the dough. (I have a small and cold kitchen, it makes it easier). 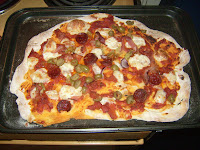