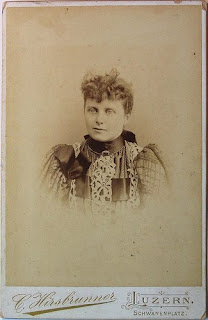 Not the title of an old fashioned detective novel, but my first forray into the history of knitting! While looking for something else I came across a reference to the papers of Agnes Sweetment held by the National Archives Ireland, the description included references to a notebook entitled 'Account of Knitting 1899', as well as related letters and patterns. As I had to go into the Social Welfare Office on Bishop Street yesterday to sign off (yippie) I thought I might as well go and have a gander at the documents too.

Who is Agnes Sweetman?
Well that her in the picture, which was taken in 1895 on her honeymoon to Lucerne. Agnes was born a Hanley and married John Sweetman from a wealthy Irish Catholic family who owned a brewery in Dublin. They lived at Drumbaragh in county Meath. John was involve in several political and social movements in Ireland at the time, including the Meath Agricultural Society, which aimed to improve agriculture and so assist the lower classes. (I promise this will be important later). 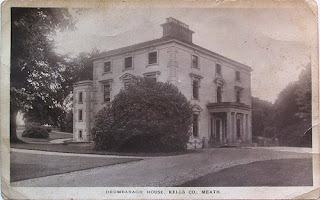 So what's in her papers?
The Sweetman papers in the National Archive are mainly the correspondence of Agnes with her family and friends, the ones I was interested in related to the establishment of the Home Industries Branch of the Meath Agricultural Society (see I told you it would be important). The Home Industries Branch, set up in about 1897, seems to have been an attempt to provide paid work to working class women in Meath, to suppliment their family income. The introductory letter, sent out presumably to middle and upper class women in Meath, asked the 'ladies' to make a list of those 'desirous of paid employment in lace, hem-stitching, knitting, weaving of home-spun & flannel, basket making'. Applicants had to provide samples of their work, and details of how fast they worked. They were to be advised that 'only a first class article will comand the best price ... in knitting each stocking must be exactly the same size, leg & foot, narrowed at the same place and without knots'.

As well as the introductory letter there is the notebook in which Agnes had recorded how much wool they had bought or been given, and which workers it had been given to, what each worker had made and how much they were paid. The rate of pay was 8 pence for a pair of gloves, 8 pence for a pair of short stockings and 1 shilling and 6 pence for a pair of long stockings. This may not seem much but using measuringworth, which calculates the relative value of money from the past, this works out as £15.60 (stirling) for the gloves and short stockings, and £35 for the long stockings. And that just the labour cost, not the final sale price. The files also contained several drafts of letters sent to workers about the items they made, which show that standards were expected to be very high. One example is a letter that states "these gloves are very evenly knitted, but the fingers at the top are not rightly done - I think the little gusset between the fingers a good idea".

The last items I found were two hand written patterns for the knitted gloves and short stockings. I think I feel a reconstruction project coming on! The patterns are very briefly written and assume quite a high level of knitting knowledge, they also don't give any indication of the size of needles or type of wool, but I like a challenge. I'm sorry there are no pictures of the documents but you can't use digital cameras in the archive. As an archivist I also feel compelled to give you the document reference numbers, in case anyone want to go have a look themselves, they are; 1190/5, 1190/6/8 and 1190/9/10. 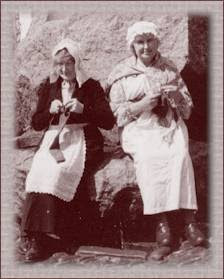 I couldn't find a photo of any genuine Irish knitters,
but these ladies look like they are having fun,
plus what about the hats!