I seem to have developed a suspected knitting related injury :(
The last couple of weeks the tendon (so the almost Doctor tells me) in the index finger of my right hand has been hurting when ever I bend my finger, and especially when I try to hold my needles, sniff sniff. I tried to use that finger less but it turns out its not just knitting you need it for, it plays a vital role in writing, cooking, eating - all things I like! It got so bad over the weekend I've had to resort to taping two fingers together to stop me bending the bad one.

Unable to knit, and inspired by the response to my post about Agnes Sweetman, I decided to go on the hunt for more history of knitting sources, (I can still type, just slowly and using one finger). Searching the available online catalogues for Irish archives I came across quite a suprising amount.

The items I found fell into two broad categories; 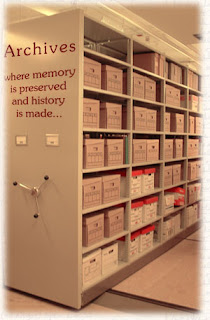 Firstly - Books of knitting patterns and instructions compiled by individual women. Sadly I have only identified a couple of these, I guess that not seen seen as being of great value they have not survived and made it into archives. However, I also know from experience that online catalogues don't always list the entire holdings, and that items considered "less important" are not included, so there may be more.

Secondly - There are quite a lot of official government sources about the creation and support of small scale knitting industries, especially in the West of Ireland. The government schemes seem to correspond to periods of economic downturn - The Famine, 1920-30s and 1960s, so who knows, maybe knitting it the way to get Ireland out of recession?

Some of the catalogues give extracts from the sources and my favourite comes from the Lismore Poor Law Union Minutes from the 1860s. The Lismore Poor Law Union ran the Lismore workhouse where the poor who could not support themselves could go/or be sent to live and work often doing menial tasks. The minutes record that;
Bridget Dunn and Mary Readon, inmates, [were punished] for `clandestinely knitting stockings'. They had to forfeit their materials and the inmate Mary Callaghan was reprimanded for `giving impertinence to the Matron'. 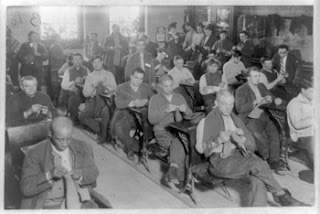