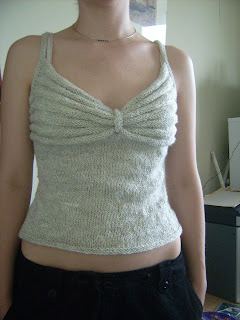 So I realise this is neither ruby or a twinset, but hopefully on the retro side. It's half of Joan McGowan-Michael's Retro Ribby Twinset, from Kntting Lingerie Style. (When I first looked at the pattern I mis-read the name as Retro Ruby Twinset and had an image of a red haired fifties starlet in the outfit, hence the name!)

Anyway, as you can see I've finished the cami, it is knitted in Jaeger Kathmandu which I was given by a friend in my Tuesday night knitting group. (I think the wool is not available anymore). I increased the length of the body of the tank by one and a half inches and it is still not a long top, and I also found that the straps were enormously long. I like the outcome but I think the girl on ravelry is right in saying that is is probably a design that is better suited to the more well endowed lady ;) Ah well, its nice any way, and I'll certainly be making the matching shrug.
Labels: FOs Knitting