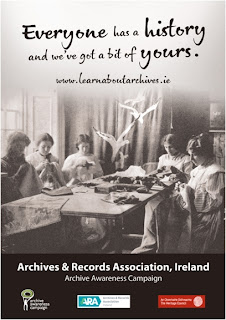 The poster of the campaign is particularly appropriate for this blog as it shows Lily Yeats and her assistants in the embroidery room at the Dun Emer Guild in 1905. (The image comes from the Yeats Archive in the National Gallery of Ireland). Although the images is lovely, what I am really interested in is the slogan 'Everyone has a history and we have a bit of yours', so what do Irish archives have about knitting?

I've written about this subject before in this post about Agnes Sweetman and the Meath Home Industries Branch, and created one of items from the pattern notes. At the time I had recently qualified as an archivist and was unemployed, so had plenty of time on my hands, and I did some further research about what else there was in Irish archives about knitting. Since then I've not had a chance to look at any of the documents I located, as I found a job and other things overtook me. But maybe as I don't have the time someone else out there might, so to whet your appetite here is an overview of some of the items I found.

The National Archives hold a number of official documents relating to this history of knitting in Ireland, especially government schemes in times of economic downturns (notably the Irish Famine and the 1940s). One of my favourites is a file of documents from 1941 described as relating to 'travel facilities for Irish girls resident near the border for the purpose of attending knitting classes'. No amount of political trouble should come between and girl and her knitting! In the 1960s there was also a fair trade commission on women's stockings and knitting yarn. Was there a big problem with cartels driving up the price of knitting wool and stockings?

Both Trinity College and the National Library of Ireland hold commonplace books (note books) which contain handwritten knitting patterns. I did have a look at the one in the National Library and it was really interesting, I took some digital images, but I lost them when my external hard drive exploded. You can also often find knitting patterns in the printed reports of hospitals from the end of the nineteenth and early twentieth centuries. Friends of the hospital were encouraged to knit items to donate to the hospital. Trinity College also hold a manuscript poem by Samuel Lover (1797-1868) to a Miss Muspratt 'on her knitting a purse for the author'. I'd love to have a poem written to me on my knitting prowess, sadly I couldn't find a copy of this poem online. I image its not one of his best works as the only quote given in the catalogue description is 'what very good eyes you must have'. Sounds a bit like Little Red Riding Hood to me! The National Library also has the music scores for 'Knitting songs' from the 1890s. What are they? Songs about knitting, or songs to knit too?

There a lots of other items scattered across Irish archives, but one place outside of Ireland which rates a special mention is the Shetland Island Museum which has an extraordinary collection of items relating to the history of knitting. A simple search of their archive catalogue produced 233 records, including interview, letters, manuscripts and published works. There are also over 150 photographs, including several like this one showing ladies using their 'free time' while carrying peat home to do some knitting! Maybe I should take this up when I'm walking home from work ? 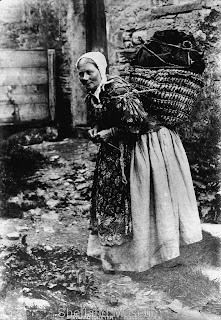