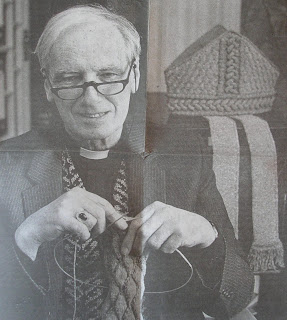 I received a copy of The Times' obituary of Monsignor Richard Rutt in the post this week. On the face of it this seems an odd thing to be sent in the post. I'm not very interested in religious matters, either Anglican or Catholic. (Rutt started his career as an Anglican bishop and ended a a Roman Catholic priest). Nor am I overly interested in his scholarly works on Korean literature. But near the end of the obituary is an interesting paragraph which reads as follows


Rutt was an accomplished knitter for many years, a pastime to which he had been addicted since the age of 7. He was often described as "the knitting bishop", and frequently wrote a mitre that he had knitted, as well as a cope that he designed and machine-knitted at de Montfort University. An acknowledged expert in this field, in 1987 he published A History of Hand knitting.

I felt that this deserved some more research. A quick google later and I realised that I had heard of Rutt before. I recognised the cover of his History of Hand Knitting from a post last year by sheknitupthatball. Who could forget this cardigan? Anyway, as I have not read the book and sheknitupthatball has, I can only recommend the interested reader to study her informative post. 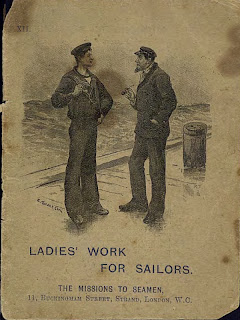 From my googling I also discovered that Monsignor Rutt  donated his extensive library of historic knitting books to the University of Southampton's Library. The library has since digitised a selection of the 19th century knitting manuals from the collection which are now available online here

Oh my goodness, what a fantastic resource! I've only just dipped in and out of a couple of the items and there are some fascinating items. They range in date from Miss Myra Knitting Lessons (c.1800) to Ladies Work for Sailors (1902).
Labels: Knitting history Monsignor Richard Rutt