When I first started sewing as teenager, there was rather a limited supply of patterns and fabric. This may partly have been because I lived in a small market town in Wales, with only one, eccentric, haberdashery shop. This shop did have its charms, but the selection of both patterns and fabric could best be described as limited and dated. I am sure that some of their fabric remained in the shop the entire time I was growing up, and would probably be their still if they hadn't been taken over and moved. 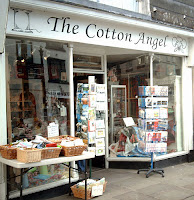 However, I think part of the reasons was that there was less interest in sewing, and their was just less market and less products. Certainly on my last visit, the current incarnation of my home town haberdashery shop had a much more tempting range than 10 years ago. Anyway, this is all heading to me telling you that last month I treated myself to two new patterns from, at least for me, new designers.

My first project was Colette's Crepe dress, described as 'A sweet and easy wrap dress with no closures to sew. The dress wraps in back and has cap sleeves. ... Version 2 (my choice) has a shaped sweetheart neckline and waist ties in a contrasting fabric'.
Of course when the pattern arrived I realised that I only had 2.5m not the 3m I needed of my planned fabric for the project; Amy Butler Memento. After some thought, I decided to change the construction, by inserting a zip on the left side, I would need less fabric as it didn't have to wrap. To keep the nice design of the back where the two piece cross over, I made the top half of the back in two bits, and attached them to the back of the skirt at the waist. 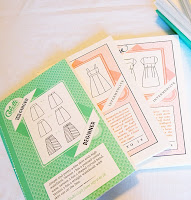 I really like the pattern, and not just the design but the physical object. Instead of the envelopes most patterns come in, Colette patterns come as a little booklet with a pocket at the back to keep the pieces. The instructions were clear and easy to follow, and the booklet was much easier to handle than a big printed sheet.
I'm also incredibly pleased with the result. I know I put up a picture last week, but in case you missed it, but really just because I like it, here it is again. 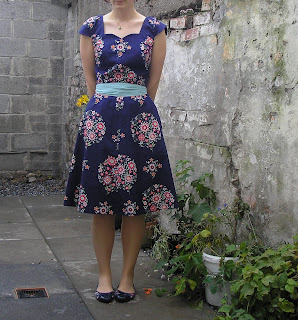 I think the fabric works really well with the design of the dress, although the design is a little bit out along the front seam. It took me ages to find the blue for the sash, you can't see so well in this picture but it matches the blue flowers in the dress. I dragged my poor long suffering boyfriend round most of Dublin's fabric shops in the hunt for the right blue!

My only difficulty now is which of Colette's patterns to buy next. I had almost decided, and now they have brought out their fall range and I'm back to a state of complete indecision ...
Labels: Colette Patterns FOs pattern review sewing