Another pattern review inside of a week? But the two are related. As I mentioned in my last post I bought a couple of patterns from makers I'd never used before, and part of the reason for writing the last post was to cheer me up as I was in a total state with my other pattern! 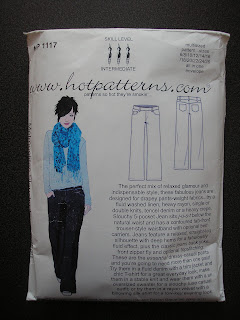 This project was a pair of jeans, which had been on hold for a while as I was having trouble finding any denim in Dublin, which wasn't made with Lycra or very lightweight. Unlike the Colette pattern which impressed me as soon as I opened it, hotpatterns was less inspiring. The pieces are printed on normal paper, which was alright but I don't really understand why they had done this. Although they were printed on big sheets there were obvious breaks where they had been copied(?) from different sheets and the line of the pieces didn't match. Also all the size were printed in solid black lines which made it very difficult to know which line you should be cutting along. However, I will say this would probably not be annoying me as much if I had been successful with the pattern.
The instructions are not clear, which is fine if you have some sewing experience, and they do say on their website 'we assume that our customers have a reasonable knowledge of basic dressmaking'. I was doing OK until I got to inserting the zip, I have never come across the method they used, and I just couldn't follow the written instructions and the diagrams were anything but helpful. (Again they don't use the normal convention in the diagrams of shading the right and wrong sides of the fabric piece differently). I even called on the boyfriend to see if he could make sense of the instructions, he couldn't! I eventually managed, with some choice expletives, to get the zip in. Its not very well done, but it would do. However, when I put them on they were horrible. I don't know if it was me or the pattern, but they don't look anything like the ones on the packet.
The line of the crotch goes up into a weird point in the middle, who is shaped like this? They had odd jodhpur like shaping at the sides, and the front is very odd and kind of square shaped. I was so upset, the pattern looked so appealing! I've spent most of the last week and this morning trying to sort them out, and all though I have managed to reduce some of the more unpleasant eccentricities, I know I'm never going to be happy with them. And, if i do get round to finishing them, I will always feel the horrible leaden feeling of disappointment whenever I put them on.

Phew ... rant over.
So, what have I learnt from this experience. Well, all new and shiny things are not wonderful, but those that are, like Colette Patterns, are delightful. Secondly, don't forget those good faithful old staples that have stood by you for years. Before embarking on my disastrous jeans, I spent a happy afternoon making a very nice little skirt out of some left over (from an unsuccesful dress) tartan check fabric using a Burda pattern I've used before. Good old Burda, nice designs, clear instructions and they work. 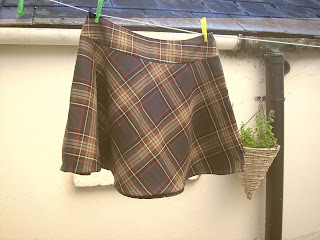