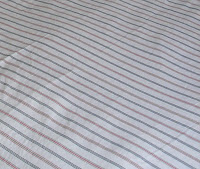 Last weekend when I was at home I found some lovey striped cotton fabric. It was such good value (£1.50 a meter) that I bought 8 meters. This weekend I've been working away on turning this fabric into a double duvet set.
I had considered writing a tutorial on how to do this. But given the number of expletives used in making this, I'm not sure that would be a good idea! There are also plenty already available on line. I will however offer a few suggestions; don't use stripped fabric - it shows up an slightly wonky sewing. And a tiny bit out over a two meter hem can make a big difference. Also, you need a big sewing table and lots of space to handle the amount of fabric in a duvet cover.  I manged to knock over my sewing stool moving the fabric, didn't notice and fell on my bum on the floor, owwww! Not an essential, or even recommended, part of the process.
Once I had recovered, and demanded some sympathy from the boyfriend, I got on with the sewing. 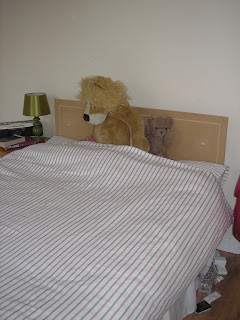 Although my collection of teddy bears' don't look so sure, I'm quite pleased with it. Once it is on the bed, you can't see all the problems I had with getting the line straight, and I like the pillow cases, which have the fabric going the other way. 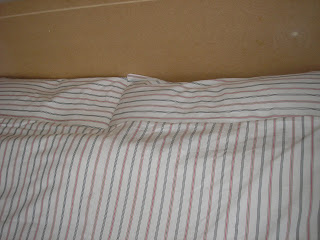 This photograph also give you a good view of the mdf headboard, made by the boyfriend's brother, which is just waiting for a lick of paint to finish it off. Its very nice of him to make it for us, I suspect he is feeling guilty about him and his friends drinking nearly all of the Weiss beer my boyfriend made me for my birthday. In retrospect, it probably was unwise to leave it unprotected in the cellar.
I'm looking forward to sweet dreams in my newly kitted out bed ... night night!
Labels: DIY Home sewing