An Ode to an Old Singer 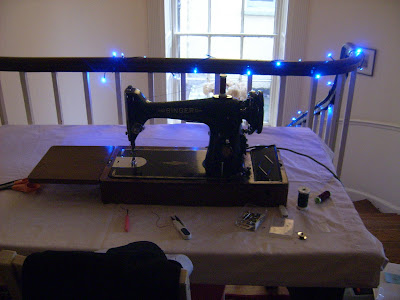 This thing of beauty is my mother's old Singer sewing machine, originally a hand driven one, which has since be moterised. It is the sew machine I learnt to sew on, and has see two generations of seamstress in my family though many disasters and triumps. Including meters and meters of curtains, items of the latest fashion of the last 40 decades and many pairs of jeans. 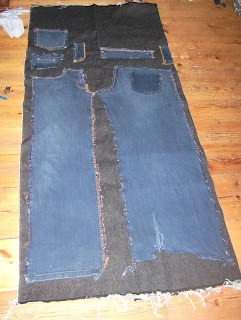 In common with, I suspect, many ladies, I find finding the perfect pair of jeans a bit of a nightmare. Then of course when you have found one, the shop immediatly decides to change their design! Argh! My solution? When I finally decide my jeans can't last any longer, I take them apart and use them as a pattern for a new pair. I've been carrying out this process since I was a teenager, athough I have updated my patterns since then :)
This Christmas I was at home for a two lovely weeks with my family, and of course, my mum's sewing machine. I have my own sewing machine in Dublin, but it is a new Singer, and although lovely in many ways, it doesn't like denim. It can't cope with the thickness of denim, especially in areas like the waist band where there are several layers of fabric.
At home for two weeks I was able to churn out two new pairs of jeans. The first using the pattern from a pair of jeans I bought years ago from Miss Selfridge, and have since re-made several time. I really like them, they are a nice relaxed fitting, slightly flared leg. I know they are a little long, but I do like my trousers a little on the long side. 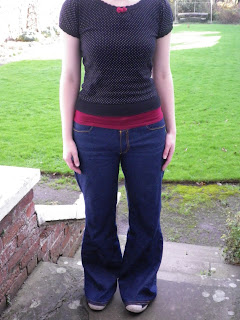 The second pair are a new re-make for me. The original jeans were from UPIM (an Italian department store) in Sardinia, I bought them the last time I was there, which was probably three and a half years ago, and I have wore them to death! It was a bit of a wrench cutting them up, as they were still just about wearable, but I decided I had to risk everything on being able to recreate them. 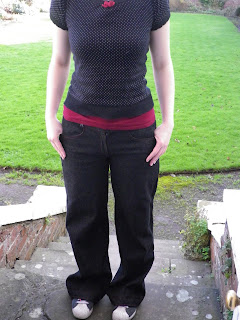 Thankfully, it paid off. I decided to make them up in black denim for a change, which I think works quite well. You can't see in this picture but I used some black and white pattern petersham ribbon to make the belt loops, as I find making belt loops out of denim can be very fiddly.  I also have to confess, that although I made these over Christmas, I only put the finishing touches to them this weekend. Lovely as my mum's old Singer is, it doesn't do button holes, and after trying to do one by hand on their first pair, it seems that I don't do button holes very well either! So this weekend, I cheated, and put on a hook and bar trouser fastener. I also had to do some running repairs on my first pair, where the 'hot needling' on the waist band turned out not to be able to stand up to the washing machine.
Labels: FOs jeans sewing sewing machines