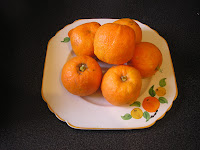 Last week I received an exciting parcel in the post from my Sardinian uncle; a batch of beautiful Sardinian marmalade oranges, freshly picked from his friend's orange grove. On a side note - isn't the plate cute? I found it when I dropped into the charity shop on the way to buy the rest of the ingredients to make my marmalade!
My mother is a fantastic jam maker and preserver, but although I've watched and helped her for years - it was a little nerve racking setting out on my own!  I used as a guide The Basic Basics Jams, Preserves and Chutney Handbook, a book which had previously received the maternal stamp of approval, and this is what I did. 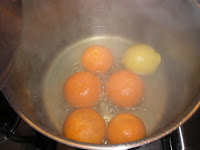 To save having to prepare the oranges before cooking when they are fairly tough, I simmered 5 oranges and a lemon (roughly a pound of fruit) with 2 pints of water for about an hour and a half until the fruits were very soft. I then lifted them out, and once cool enough to handle, I cut them in half and pop the pips back into the cooking water, and boiled for a further 10 mins.
While this is boiling, I chopped up the rest of the fruit - skin, pith and all. This can be as thin or as chunky as you like - depending on how chunky you like your marmalade. 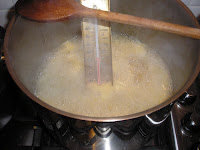 After the ten minutes boil fished out the pips - this is a bit of a fiddle, I used a small mesh sieve, but a slotted spoon would do as well. Once all the pips (or in my case most of them) are out, throw in the chopped up pulp and bring back to the boil, then add about 2lbs of sugar. Turn down the heat and stir slowly until all the sugar is dissolved. They whack up the heat and boil until it reaches setting point - I used a jam thermometer to measure this. 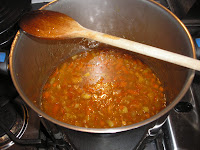 Following a tip from my mother I let the marmalade cool for about 25 minutes before putting into jars. She says if you don't do this, all the chunks of orange will rise to the top in the jars. As it cools in the pan you can also start to see if its going to set, as a skin will start to form on the top. Once its cooled down it can go into sterilised jars (I heat mine in the oven to sterilise them - and then try not to touch the inside while filling them.)

The quality I used makes about 3lbs of jam... 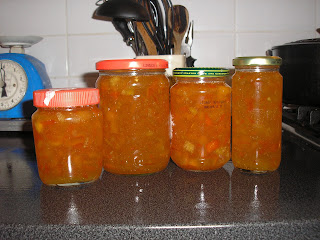 I really enjoyed making the marmalade, and although it does take quite a long time, for the first hour and a half you can really leave it to itself, and then there is just the burst of activity towards the end.  Its also very satisfying seeing the jars of jam at the end. And I certainly think I'll be stocking up my cupboard with other preserved treats in future. And for now I've got some delicious homemade marmalade to eat on toast for my breakfast, just like Paddington. 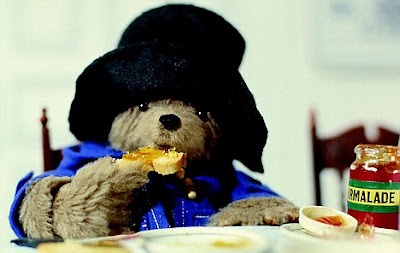