Despite the name of my blog you might be forgiven for thinking that I have given up on my knitting, but this is not the case. Haz still has wool, and she still knits. So what haz I been making? 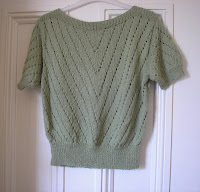 This top, which is from Susan Crawford's A Stitch in Time. Vol II, which was a Christmas present. It has loads of lovely designs, and it was hard to decide which to make first, but in the end I went for the 1920s Jan Sweater. The pattern is fairly straight forwards, apart from the little eyelets, and there were a few occasion when I had to rip back because I was out of sequence. The top is knitted in Drops' Baby Alpaca Silk - which is beautifully soft, and very reasonably priced. Full details of the project on Ravelry here.

I started the top in March and my aim was to get it finished so I could wear it as part of Me Made May, which I have successfully done. Plus I have found that it goes very well with my new vintage trousers. 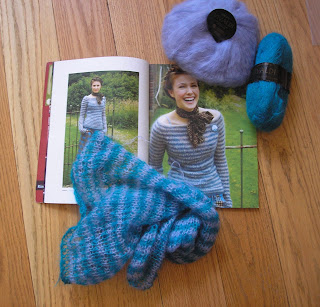 Working on two of my New Year knitting resolutions; to knit selfishly and to use up my stash, I've headed straight into another knitting project for me.

The electric blue Drops Vivaldi came from a knitting swap years ago, and has been languishing in my stash for ages. I love the colour, its just I've failed to find a project for this. Eventually, I decided on this pattern, so headed down to the Constant Knitter to find the second colour. I intended to get a white/cream contrast, but in the shop I was taken by the contrast between the lilac purple and the bright blue and decided to risk it. Its a bit more unusually than blue and white, but I think its working well. The pattern uses 8mm needles so it is flying along, and I'm well over two thirds of the way there. More details of the project on ravelry here. 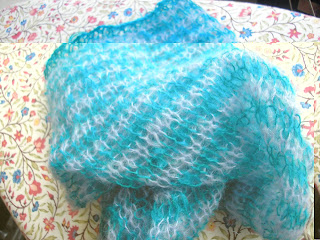