HandmAid - a de-stash or re-stash oportunity?

Last Saturday was HandmAid, the wonderful event which combines raising money for charity with all things crafty. As with last year I was running the market stall with my partner in crime Wendy, we spent the day convincing knitters to part with their cold hard cash for yarn based goodies, at bargain basement prices. Lets face it, a very easy task :)

The most common complaint on the day was that people were buying more yarn than they had donated, and that they would be in trouble when they got home.  Now, I wasn't very sympathetic at the time, after all I had a lot of yarn to shift that day, but now, as I look at the amount I brought back from HandmAid I'm thinking I've also ended up buying more than I have donated! It was just so hard not too, especially as I was in at the beginning and could see ALL the lovely goodies as they were unpacked onto the market stall table. If I try very hard, and jump up and down on it a lot, I'd like to convince myself that I could get it all into the same bag I brought my donations to HandmAid in - but i know it's much fuller than it was.

Time to confess, its all part of excepting I have a problem and dealing with it, this is what I bought; 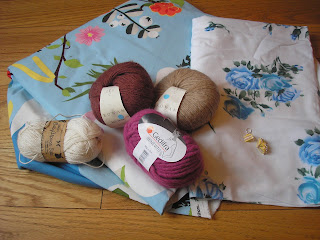 Doesn't look much? Well, I've not told you how many balls of each I've bought ... its quite a few, except the drops silk alpaca of which I only bought one, mainly because there only was one! But, I have plans of what I'm going to make with most OK some of them.

If you missed out on HandmAid, don't worry - I think there are going to grab bags of goodies available soon, keep an eye on the website