Taffy for a Welsh girl 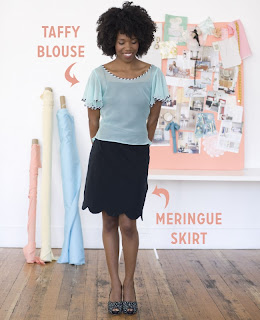 My most recently completed sewing project is the taffy blouse, from the Colette Sewing Handbook. Although I've had this book since last Christmas, this is the first project I have made. It was one of the patterns which first attracted me to the handbook, partly as it is a very pretty pattern but also the name (more on that latter).

One of the nice things about the Handbook, is that each project is designed to teach you new skills. In the case of the taffy blouse making bias binding (which I've done before) and French seams (which, shamefully, I've not). I found the French seams really easy, and a great idea. They are so neat and clean, I can certainly see myself using them again in other project. 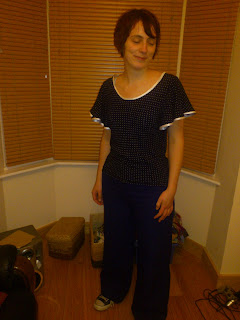 The fabric is some I've picked up in a charity shop in August when I was at home. Although it was an impulse buy, I did think at the time I might make this blouse from it. In the end I decided against making my own bias binding, as I wasn't sure that the spots on the fabric would work that well. Instead I just bought some plain white bias binding. I have to say I love the sleeves on this top, they are just so ridiculously huge, full circles of fabric, but as the top is so plain otherwise, I think the top pulls them off.

But back to why the name attracted me, for those of you that don't know 'Taffy' is the Welsh version of 'Paddy' - it seems to have come from a combination of the Welsh name Dafydd and the main river in Cardiff the Taff. So it seems an appropriate name for a top for a Welsh girl. The name Taffy is now probably best know in the anti-welsh nursery rhyme, of which there are a couple of versions, this being one;

Taffy was a Welsh-man, Taffy was a thief;
Taffy came to my house and stole a piece of beef;
I went to Taffy's house, Taffy was in bed;
I took up a poker and threw it at his head. 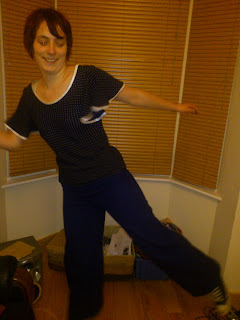