The Knitting and Stitching Show: a reassessment?

For the first time in a couple of years I decided to head out to the Knitting and Stitching Show in the RDS last weekend. I've been a couple of times before and have never been entirely satisfied. I didn't have anything planned for this weekend and I thought I should give it another chance.

I went early on Sunday, as I'm not mad on crowds and thought this would be a quieter time (which it was). One of my biggest problems with the show has always been the cost, I just find 15euro a little steep. I know you can save money by booking in advance, but not much and I wasn't that organised! So I bit the bullet and paid the price.


So how did I find the show? Well, there were a lot of stalls and I did see some nice things, but there was not a huge amount that really caught my eye. I did buy some wool, some which I planned too (Drops Nepal) and some which was an impulse (Drops Lace), and some needles. But all this came from Dublin shops, The Constant Knitter and Winnie's Wool Wagon, so I could have bought it anyway! 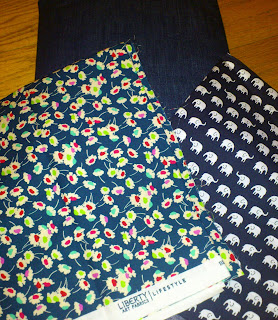 I did pick up some nice fabric from Fabrics Galore's two stands. Some denim, pattern cotton for an upcoming Christmas project, and some lovely Liberty fabric as a little treat for myself. There was a  much better range of fabric than I would normally see in Dublin, and the prices were comparable if not better than I would normally pay.

All in all, I'm not sure I would go to the show next year but I might at some point in the future. I think what I really discovered is that Dublin has some pretty good wool shops, many which have opened up in the last few years, but doesn't have such a good range of fabric shops - although there are some signs this is improving.