Last month I went to Sardinia to stay with my Zio T (the Sardinian widower of my aunt). Zio T, who is now retired, used to be a traveling salesman. I remember as a child being slightly perplexed by him selling haberdashery and underwear, it seemed such an odd combination, although I now realise it is not that uncommon a combination in European shops. We sometimes ended up with the samples from Zio T's trade including very fine Christian Dior tights with diamante on the ankle (beautiful but not practical) and sets of lace cuffs and collars (which I didn't appreciate at the time, thankfully as my family keep everything we still have them, and I am planning to use them in a number of forthcoming projects).

Thanks to Zio T's old job, he still has connections in the haberdashery trade, so when I was over there I had an expert guided tour of what Cagliari had to offer. I was especially looking for some faux fur for my planned jacket. The first shop, Ciabatti, was fantastic. They had lovely little green boxes full of all sorts of haberdashery gems, plus a underwear section at the back of the shop (see the two do go together). Sadly, they didn't have what I was looking for, so we moved on to another shop. 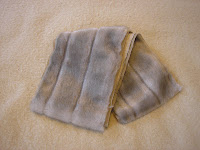 Now I kept the bag from the second shop we visited, as it was very pretty and to remind me of the name, but I now can't find it, so I can't give them the credit they deserve. I will keep looking for it, and until then I can only say it was on Zia Dante. They didn't have the fur trimming I wanted in the shop, but for Zio T they popped round the corner to their warehouse to fetch it. It turns out it wasn't quite the winter season in Cagliari yet. Having found just what I wanted, I tried to pay but was forestalled by Zio T who, generous as ever, insisted he would pay. He was however prevented by the store owner, who refused to accept any payment from their old friend. Ciabatti were as generous when I returned a couple of days latter, and refused to let me pay for a little knitting notion I wanted.

As well as doing very well on Zio T's excellent reputation with Cagliari's haberdashery shops, I also received a surprise stash of 'retro' pajamas and negligees. Zio T had been cleaning out his storage unit earlier in the year, and had come across a pile of unsold samples from his trading days. He told me he had last worked for the company in 1991, so they are of a 'period' but some are not bad, apart from the salmon pink nightie and matching dressing gown (which is just not for me). There were so many I couldn't fit them into my luggage (I was traveling on Ryanair) but luckily my parents had a more generous allowance and could take them home for me.