By popular demand, and after a little delay, here at last are some (not very good) photos and a review of my first wedding outfit of the season. It has taken a little while, partly as I didn't take any photos at the wedding and also I'm not totally convinced about the dress. I know everyone said that I looked very nice, but I didn't feel the love for this dress as I have with some of the other ones I've made, for example my spotty '60s one. 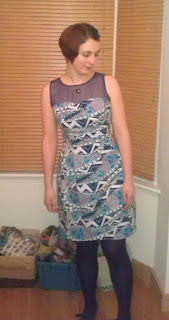 The dress is made from some African waxed fabric I picked up in Brussels last year, and the pattern is Colette's Macaron. It is the second time I've used this pattern (details of my other attempt here). The first time I used too light a fabric and it didn't hold the shape and pleats of the skirts very well. This time the fabric I used was heavier and it worked better, but I'm still not totally sold on the dress. I love the top of the dress and the use of two fabrics. I wanted to make mine a little more formal, so I made the top part of the dress from blue-purple chiffon, what I believe is called an illusion neckline. I tried making the sleeves from the chiffon as well, but my boyfriend said it made the dress look too like a t-shirt! I removed the sleeves and the facing, and just finished the edge with a neat little seam. My problem with this dress, comes down to the shape skirt, I think I'd rather a fuller skirt, like - well like many of the other dresses I have made. I think that the pleats may be part of the problem, I'm not a big fan of pleats at the waist, and the couple of times I have made trousers or skirts with pleats at the waistline I have not been completely convinced. It must be slightly to do with my shape as well, as I really like other people's versions of the dress on them.

Although the dress may not be a complete success (to me at least) I am very pleased with the jacket. 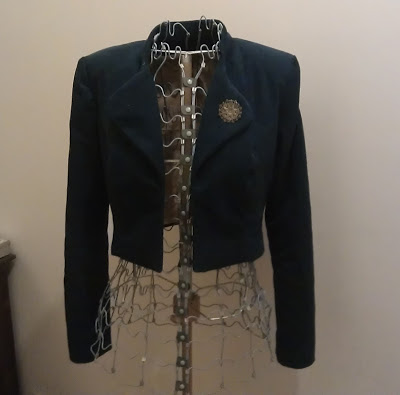 The pattern is Burda Style 7182, obviously I made the shorter version, and I used some grey/blue needle corduroy which I picked up in Hickeys. This is the first time I have made any kind of tailored jacket - although there is not too much tailoring in this one - and I found it fairly easy. Even the collar which I was dreading, went in quite well and sit evenly. The pattern calls for shoulder pads (not a feature in my wardrobe before now) and I was a little uncertain about them, but the shop assistant in Hickeys' convinced me to give them ago - and she was right. The jacket is fully lined, no skimping in this project, who would have thought I was working to a tight deadline. And quite frankly, I just love it - its a nice shape, it fits well and I can see myself getting a lot of wear out of it, just with a different dress underneath. The only thing I couldn't find in time for the wedding was a nice clip/fastener for the jacket.

The final piece of my outfit was a bag, which I just about got finished in time.

I only realised as I was starting on the project that the bag was revealable, so I used the main dress fabric as lining, with the cord from the jacket on the outside. The pattern is a Simplicity one from by Grandmother's stash, and dates from 1957. Its a perfect size for my keys, money, phone, and a spare pair of flat shoes for later in the evening. I was rushing when I got to the bag, and I made a couple of mistakes - I put one of the catches in the wrong place, so it doesn't shut properly (you can see in the left image), and I should have used some heavier interfacing to make the bag a bit stronger, but I didn't have any. I think the bag pattern is really clever, and I'd certainly make another one.

So even if the dress was not a great success, the bag and the jacket were ... and well, two out of three is not bad!