I still haz wool, and do knit

Despite the title of the blog you might be forgiven for thinking that I'm not much of a knitter. It has, after all, been some while since I've blogged about my knitting. I have been knitting less recently, partly because I've been sewing more but also because I had lost my knitting mojo. 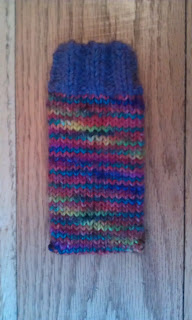 I've got back into the knit of it recently, and have just completed a nice project as a birthday present for my dad. (No pictures until next week when I hand over the present). I've also whipped up a very quick little cozy for my mobile phone, as I lost my last one.

This was a very simple project, I didn't use a pattern but worked it out myself. I used some ends of balls of worsted weight yarn. Using 4.5mm double pointed needles and some purple drops Nepal, I cast on 28 stitches and worked 8 rounds of knit 2, purl 2 rib. I changed to some Colinette Art and worked rounds of knit stitch, until I had enough to cover the phone. I kitchener stitched the cozy closed, and I was done.

Super quick and simple, and I was extra lucky that the variegation in the yarn worked out into such a nice pattern.

Having got myself back in the swing of knitting I was inspired to keep knitting, so I looked in my knitting basket to see what unfinished projects I could finish off. Well, there was plenty of choice... 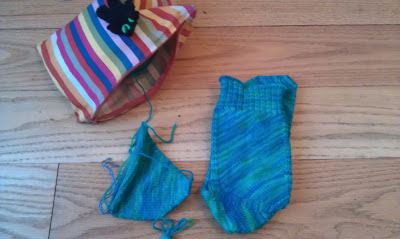 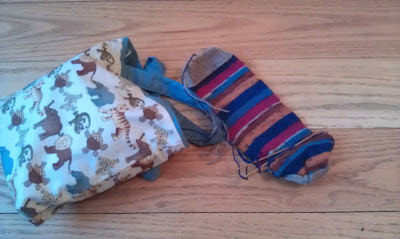 ... not one, but two, unfinished pairs of socks (the top ones started over a year and a half ago) ... 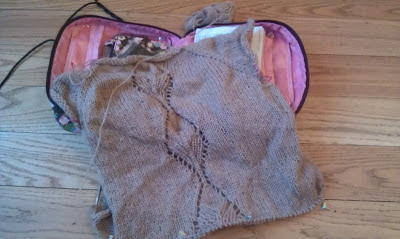 ... the majority of a short spring cardigan (which I started last year) and the wool needles and pattern for a baby hat, all matched up and ready to go!

Plenty of choice, so what did I decide to work on? 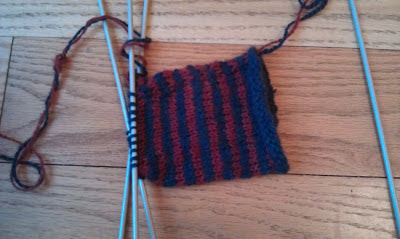 A pair of stripped arm warmers, made from the camel wool used to make my Baikal hat.