As I've mentioned before I spent a long weekend at home visiting my parents. Mum took some time of work so we could undertake some mother-daughter bonding. And what would two craft inclined ladies do with their free time? Why visit some wool shops of course. The two we ended up visiting were very different, and seem to me to sum up the changes that the last ten years or so have made to the knitting community. 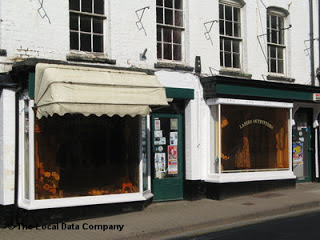 Priority 9 in Ledbury is a typical example of what could be styled the 'traditional' wool shop. It not only sells wool and sewing notions, but also ladies and gents underwear and some ladies clothing, mostly what could be most kindly described as vintage. The range of wools is good, a mix of staples, plenty of sock yarn, and the now almost ubiquitous can-can wool. But although adequate, the selection is perhaps a little uninspiring.

Sadly, Priority 9 is closing down as the owners are retiring after over 20 years running the shop. As a result the wool stocks were running low, but there were some good bargains to be had. I picked up some reduced Sirdar Sublime Extra Fine Merino DK, in cream and a light grey, and also a half priced Vintage Knits by Wendy. Mum was also able to get a some spare belts for her old Singer sewing machine, which was handy. 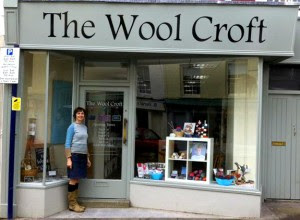 Our second visit was to The Wool Croft in Abergavenny, a lovely example of the new type of wool shop which have been popping up over the last decade as knitting has taken on a new lease of life, and reclaimed its popularity. Although a small shop it is stuffed to the rafters with all manner and variety of beautiful and desirable yarns; from the newer big brand yarns that have appeared in recent years, to smaller local companies producing Welsh wool. Such a change from the mainly acrylic yarns and horribly outdated patterns which I remember from the wool shops of my youth.

Having decided to treat myself to a little something, my biggest problem was deciding what? I was hesitating over some Louisa Harding Amitola (do I really need another knitted hat or scarf?) when a pack of jewel bright colours caught my eye.

It was a pack of mixed wools from Colinette, with a pattern for a large throw - I couldn't resist. What's more Colinette are a Welsh company, and I was shopping just before the start of the Six Nations decider with England - very patriotic! (Yes, I am claiming my wool buying habits influence the outcome of that most exciting match). Mum also picked up some Rowan wool to make a cardigan for our new Vintage Wendy pattern book, so everyone went home happy!
Labels: Home knitting day out knitting shops stash