I was a little late finding out about By Gum, By Golly' Knit for Victory knit along, but lucky as it is for 1940s knitting patterns my current project fits in, so I've joined up a little late.I'm using Susan Crawford's Perfect Christmas Jumper pattern, which I would have said was probably late 1940s, and this was confirmed a couple of weeks ago by Anthea over as Sewing - Vintage - Knitting, who found the original pattern in a pile of late 1940s knitting magazine, she found in a flea market.


The project has not been totally smooth sailing so far. Having started on the front, when I got to the decreases for the armholes I thought they were going to make the body of the jumper very short, but I ploughed on. In the picture it is a shorter length jumper, and I thought it would be OK. No, when I had finished the front I had made a belly top, not a jumper!

A quick look on Ravelry showed I was not the only person who had found the pattern short, and I should have read the comments before I started. After a modest amount of cursing,  I ripped back the front, added a fourth repeat of the pattern before starting the armholes decreases, and a few more rows before the neck shaping. My second attempt at the front, thankfully, looks like it will fit me. 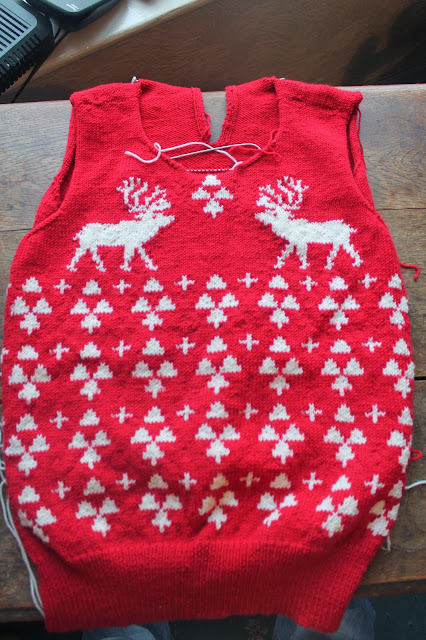 So far, I've made the front and back, joined the shoulder seams, and started on the first sleeve. I'd love to have the top finished for my work Christmas party, but its on 12th December and that getting rather close now, so I'm not sure I'll make it. I'm more confident I'll have it finished for Christmas Day, which was my original intention, and that may just have to do.

Having to rip back part of the front did hold me up, and having to re-knit the reindeer was a fiddle, but they worked our just as well, if not better, the second time round. 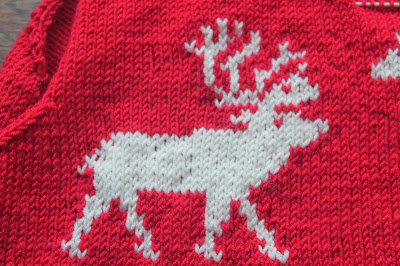