When my lovely mum first taught me to using a sewing machine one of the first things I made was some pyjama pants. I like a good long leg on my pyjama, and many of the shop bought one don't have quite the length I could wish for. I've made lots of PJ pants over the year; I had some lovely fleece lined ones with astronaut teddy bears (I was 20 and I don't care) and some amazing green ones with red, blue and yellow monkeys on them. (These were after the astronaut bears and yes, I have eccentric tastes).

I've never used a pattern to make pyjamas, as they are a fairly simple construction, but at the end of last year I bought Sewaholic's Tofino Pants. I'd read a couple of blog reviews of the pattern, and they looked pretty good. As I was going for some fancy pyjama pants I thought I'd branch out and make a top as well, I decided to use Simplicity Cynthia Rowley 2593 (which has been in my stash for some time). 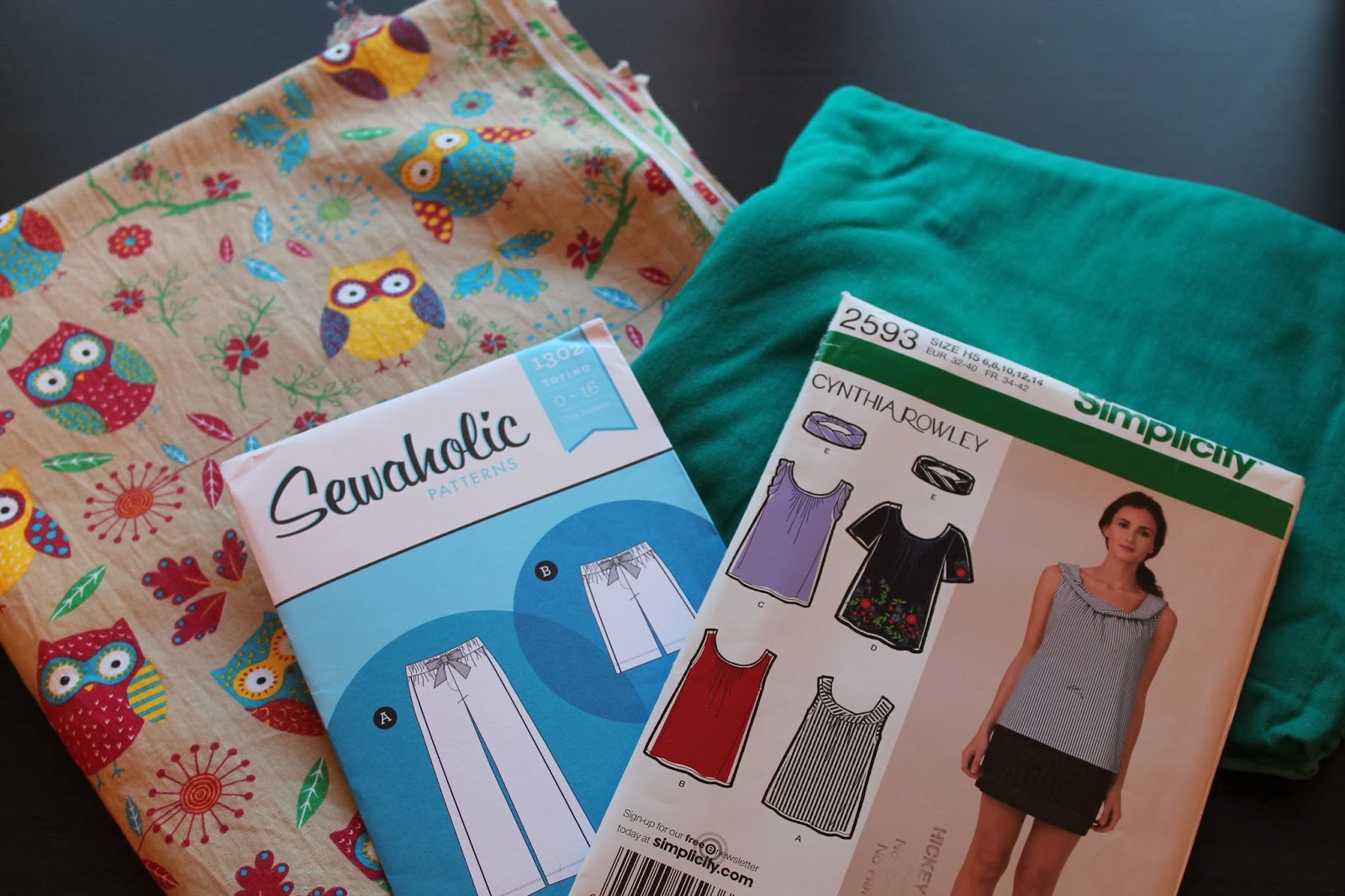 The owl fabric is cotton and the green is some light jersey - it's not exactly what the pattern calls for, but I thought it would make a super comfortable top. 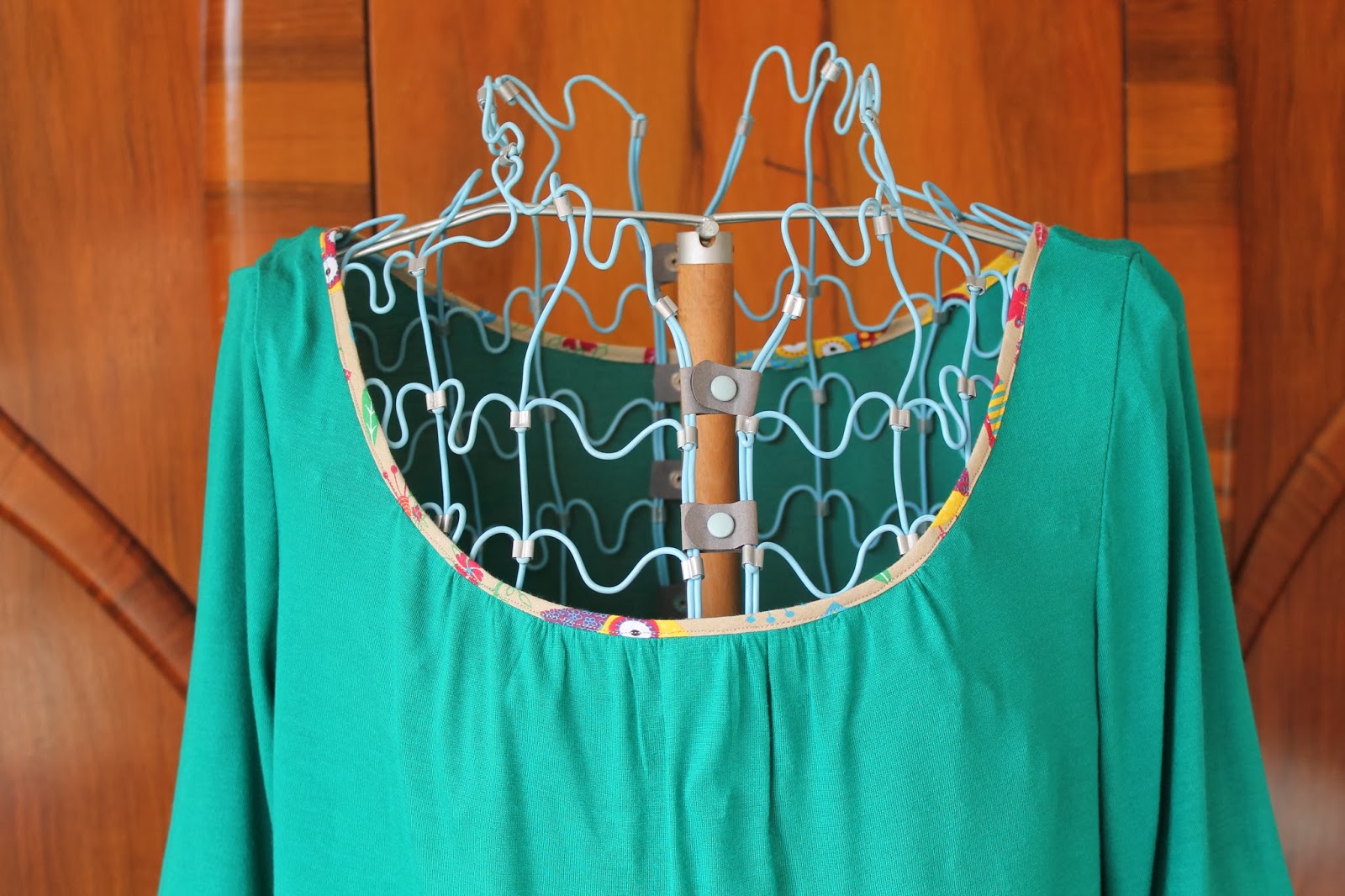 Simplicity 2593 is a nice easy pattern, and quick to make. As the trousers have contrast piping, I decided to make contrast bias binding for the neckline, and I also added some to the edge of the sleeves. This worked out fairly well, although I probably could have made the bias strip a little wider, which would have made it easier to work with. 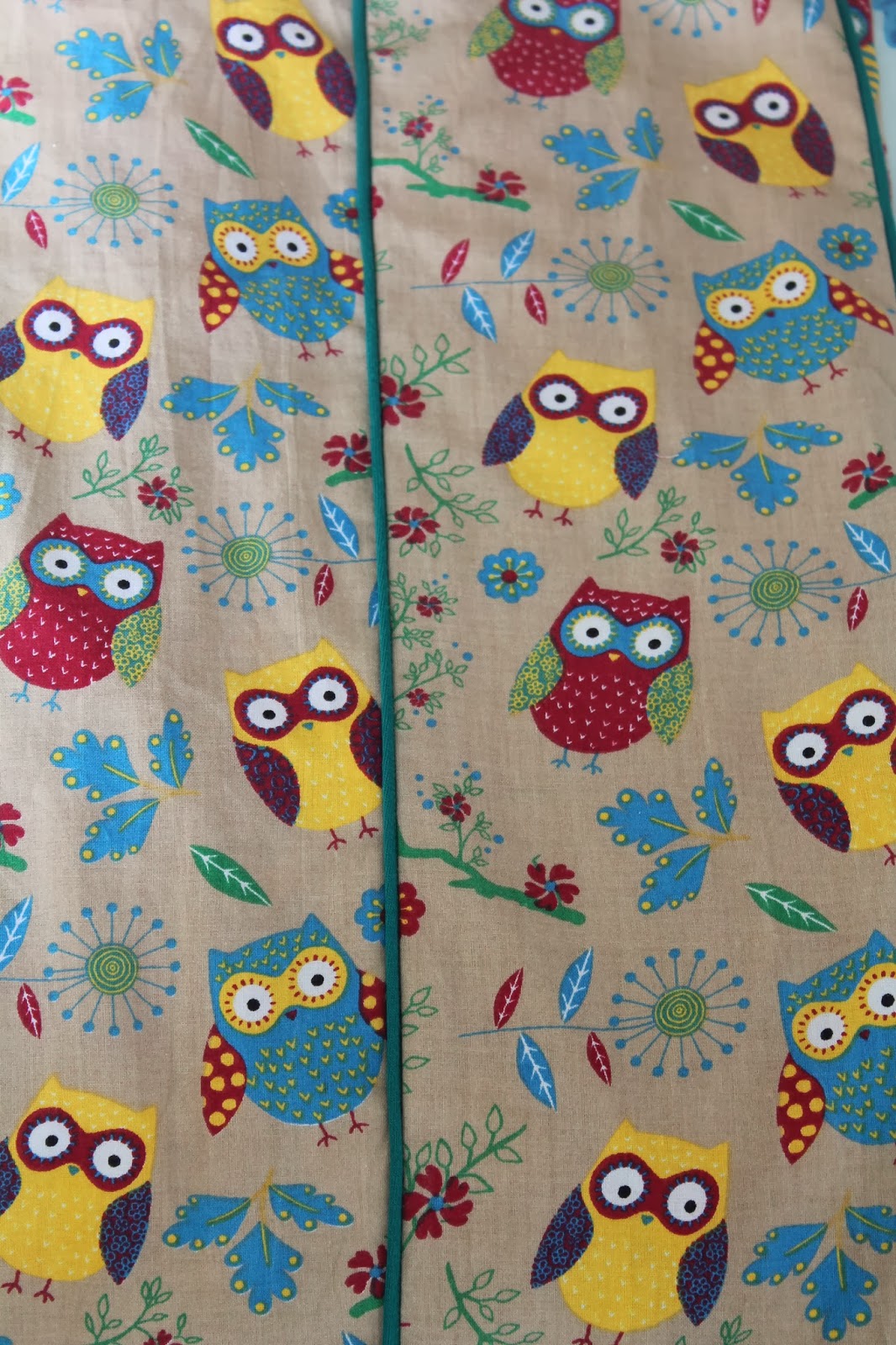 Sewaholic's Tofino is another nice, easy pattern, with very clear instructions. For a PJ pattern it does have quite a lot of pieces, the reason being there are two rows of piping down the side of each leg. (I've never made piping before, so that was a new skill to tick of my list of things to learn). The piping was very easy to make and insert, and I think it looks great. I can certainly see piping making more appearances in my sewing projects in the future.

Even with the piping and the extra pieces the pants flew together in an afternoon. They have an elasticated waist, with a fake draw string bow as well. I did make a bit of a mistake here, because the green jersey has some stretch in it, the strings have stretched, a lot! I think I'm going to have to address this, or I'll be trying myself up in knots every night. 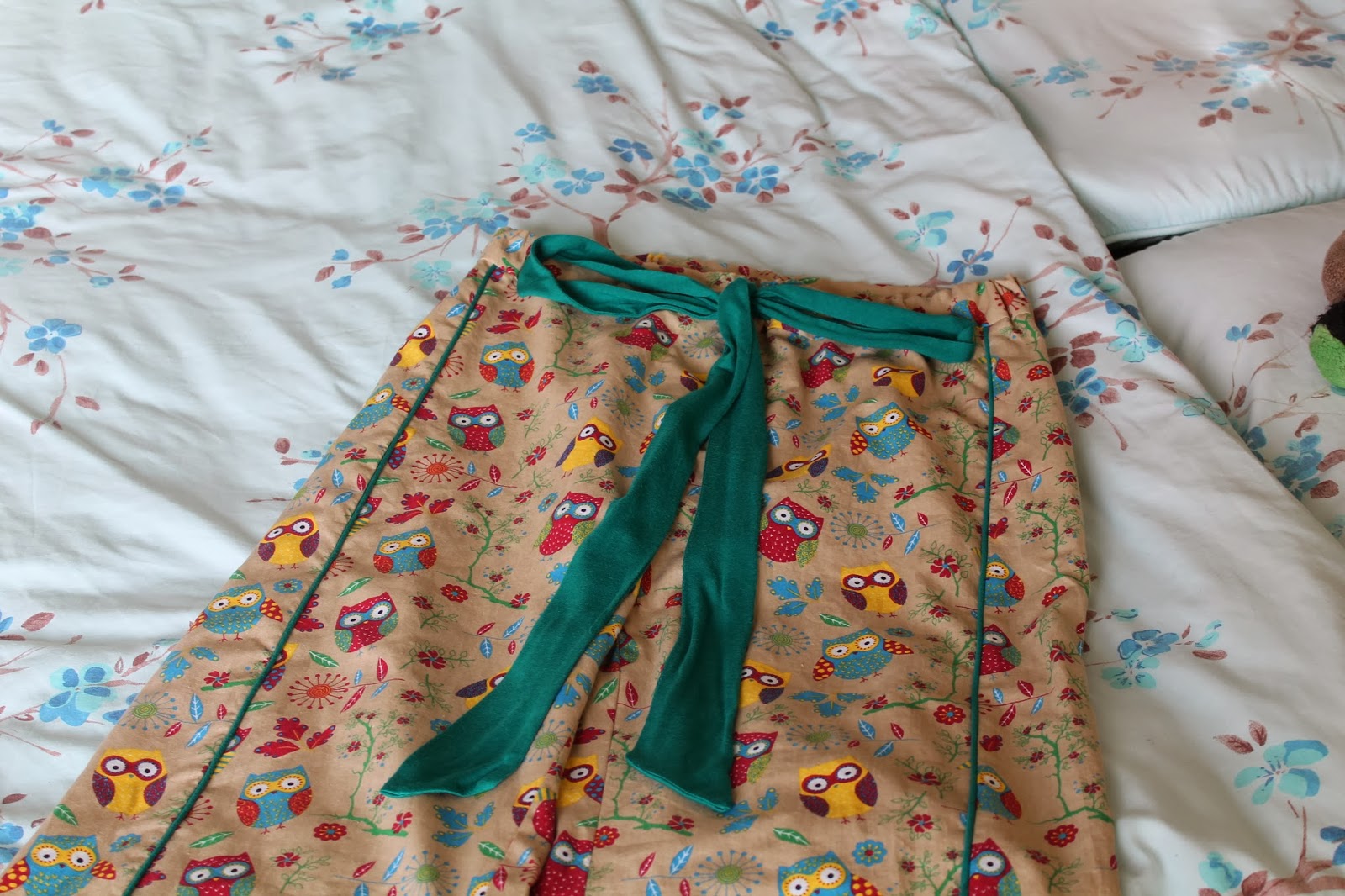 Other than this, self inflicted, mistake I love my new PJs. The design is great, described as 'comfortable lounge pants with a modern fit', they are cut higher at the back so are perfect for sitting or curling up in bed, and they certainly are very comfortable. I know I'll be making myself some more soon. But it's getting late now, so I need to get into my fancy pyjamas and hop into bed. 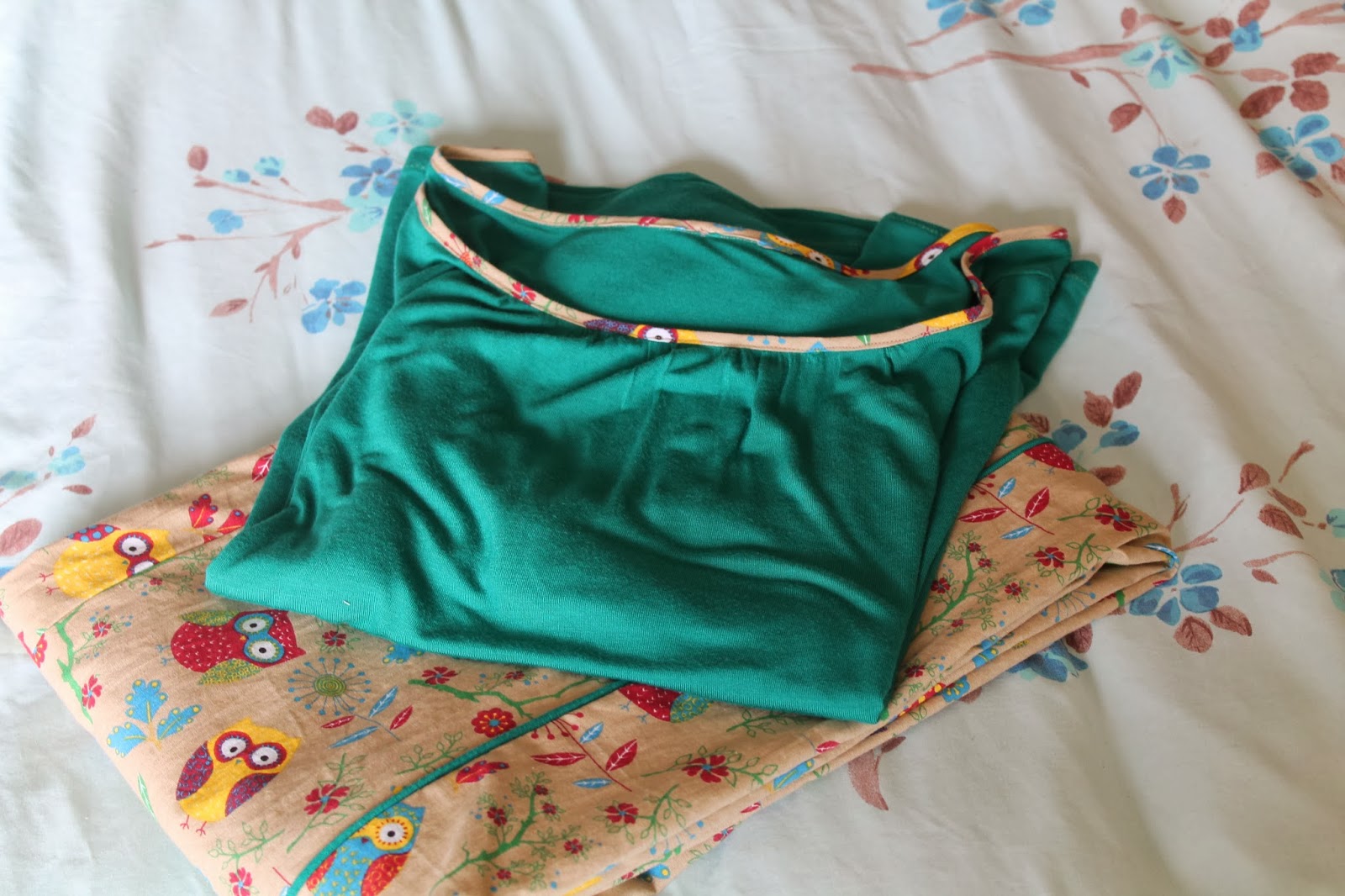