As previously mention I've been out of my house for a while now. For the last four weeks this has meant that I have been joining the ranks of the commuters, with a 50 minute commute each way by rail. As unappealing as this sounded at first, I discovered there was a silver lining - 50 minutes of ring- fenced knitting time! What with the commute, and with having quite a lot of time on my hands in the evening, I've been knitting like a demon for the last six weeks.

After finishing this little baby cardigan, I used the ends of some half balls from my stash raiding exploits to whip up two little baby hats. 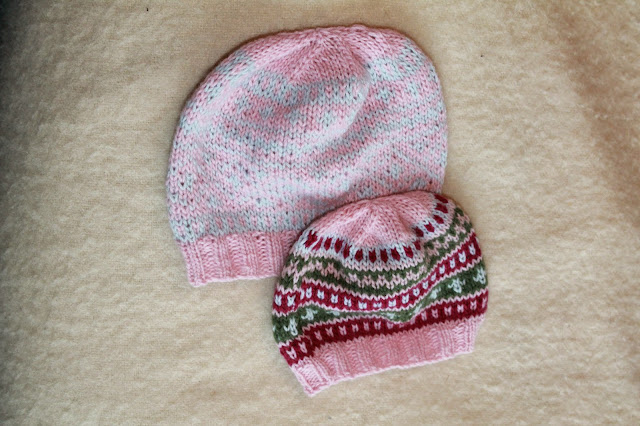 The pattern is a free one I found on Raverly (its available here), unfortunately the blue and pink in the larger hat don't have enough contrast and the fair-isle design gets a bit lost. I think the smaller hat with the brighter contrast shades works better, and it was a great project to use up ends of balls.

I then moved on to some more raided yarn, this time some beautiful blue Malabrigo lace and made the Ishbel shawl. 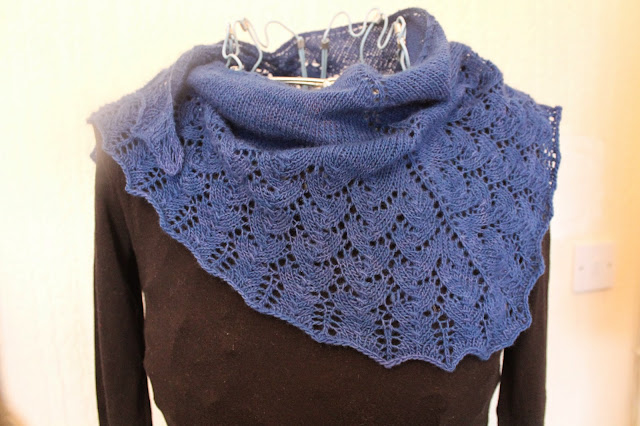 I'm really please with this knit. The yarn is a beautiful colour and so very soft. I had good intentions when I started this project of giving the finished shawl to the person I 'borrowed' the yarn from. However, now its finished I'm not sure I can bring myself to part with it. Sorry C, but there is half of the skein left so I might knit you something yet ... or not ;-)

Somewhere in the middle of these two projects, I also finished my marathon Monmouth Cap making session, and then moved on to my final commuting project. 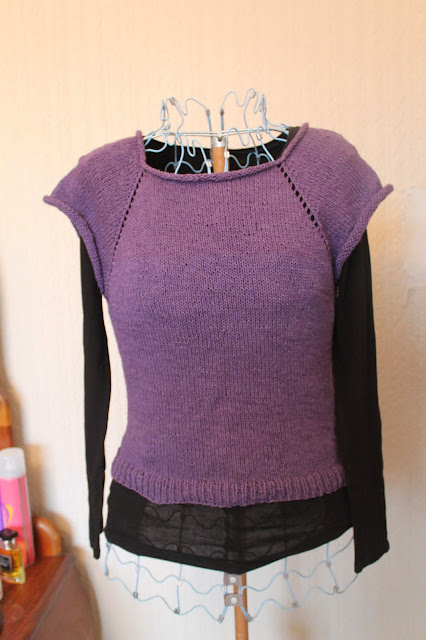 This simple little tee, is made from some beautiful cotton and possum wool blend yarn. Yes, possum wool, a very lovely gift from the boyfriend's sister who is in New Zealand. I had to undertake quite a trawl on Raverly to find a suitable project, which I liked and which didn't need too much yarn. I was a little under on the yardage for this project, and as a result made some modifications - including shortening the sleeves. But, why bother with this pattern? well its all in the back. 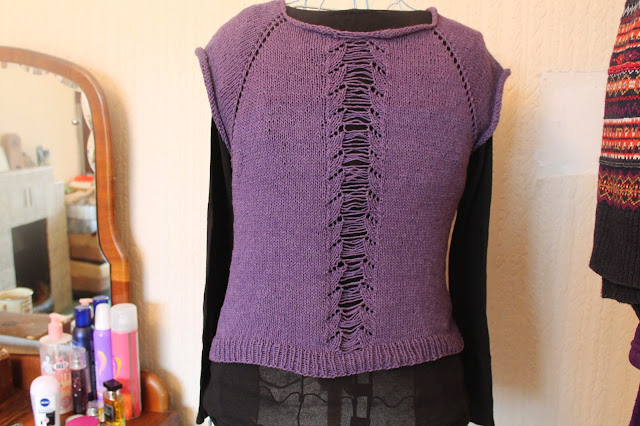 Quite literally in this case, as the drop stitch pattern on the back is design to reflect the shape of the spine. I think its really clever and very effective. The yarn was lovely to knit with (even though cotton is not my favourite) and the pattern was simple and ideal for train knitting. The only issue I have with the finished top is that it is just bordering on being too short in length. Even worse I know this is kinda my own fault, as I knew at the start I didn't have quite enough yarn. I seem to be an eternal optimist when it comes to my knitting and sewing projects and always think I can get them made out of slightly less yarn/fabric than the pattern suggests. On occasions this has been the case, but I'm not sure this is a good thing as it just encourages me to do that same with another project and it isn't always successful. However, I got away with it this time (just) so I probably won't learn anything from this project either :)

As well as being an optimist when it comes to my knitting projects, I'm also a huge nerd when it comes to Ravelry. Being an archivist in my work life, I like nothing better then sorting and cataloguing my stash on Ravelry, I have gone as far as to offered to sort and catalogue my friend's stashes, although no ones taken me up on the offer as yet. I've recently discovered that I can get an overview of how much yarn I've used in all my projects, and can break this down by year.  Here is what I have been up to this year.

I find it really fascinating to compare the yardage in different projects, for example my Ishbel shawl used almost the same length of wool as Christopher's felted slippers, but they are very different projects and types of yarn. Anyway, so far in 2015 I've knitted 4,581 meters, which seems quite a lot! Of these 2,246 meters, or 49%, have been knitted in the six weeks since I moved out of my house. I don't think I've ever had such an intensively productive period of knitting, except possibly in the run up to xmas when I'm knitting to a deadline. It also probably not going to continue any longer, as I've just moved back into my house, where everything is covered in dust and there is a mountain of cleaning, tidying and redecorating to be done!
Labels: commuting finished projects Knitting Ravelry