I bought this rather lovely sparkly yarn at the HandmAid sale last year, and its been causing me no end of problems ever since! First off, it was label-less so I didn't know what I had. This was not such a big problem as one of my knitting friends identified it at Dublin Dye Sparkle Lace, which gave me the yardage and meant I could make an informed decision on what to make with it. 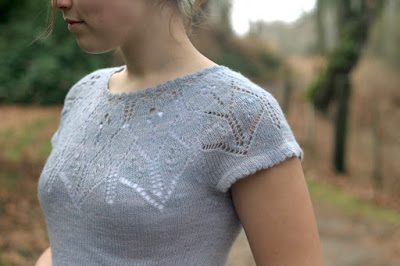 A search of Ravelry brought me to Crown Tee by Jenise Hope, I love the design and felt it would look lovely with the light sparkle of my yarn. However, it was all down hill from there. The guidance given on gauge in the pattern is a little bit vague - and I had a complete nightmare of a time getting, or rather, failing to get the gauge. It was first massive, then not quite so massive and on the third attempt still huge. After the third attempt I gave up. 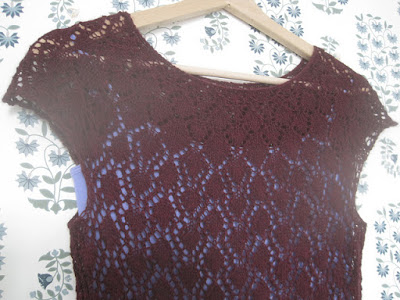 My second choice was Ruby Lace Top by Suzie Sparkles, I at least got the gauge right on the first attempt with this top. But, it wasn't love at first knit, or even second or third. It took me over five months to knit what is a fairly simple top, and it felt like a duty rather than a pleasure for most of the time! I don't really know why I didn't like the top, in the picture it lovely, maybe it works better in a darker yarn than the lighter colour I used.

I finally finished the top about two weeks ago and, I've never done this before, I ripped this project back within five minutes of completing it! Yikes, I don't know what possessed me (possible it was the couple of glasses of beer I had earlier in the evening) but I'm not sorry for what I did. Although it seems a terrible waste of all the knitting hours I put into the top, I think I'd know from quite early on I was never going to wear this top and I probably should have given up on knitting it some time before, but I can be stubborn at times!

However, the third (and final) project I've made with this wool has been a success - Gudrun Johnston's Norby hat. 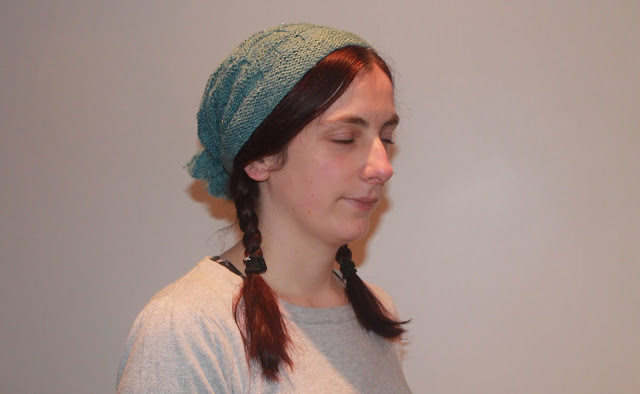 (I'm not sleeping, just incapable of keeping my eye open when having my picture taken)

Norby is designed for 4ply yarn, so I used mine held double. I found the sizing a little problematic on this one as well, and from Ravelry it would seem I'm not the only one. The hat is meant to be a slouchy fit, but my first attempt had more than just slouch! It wasn't an insuperable problem as the pattern is a 11 stitch repeat, so it was easy enough to take out two repeats. 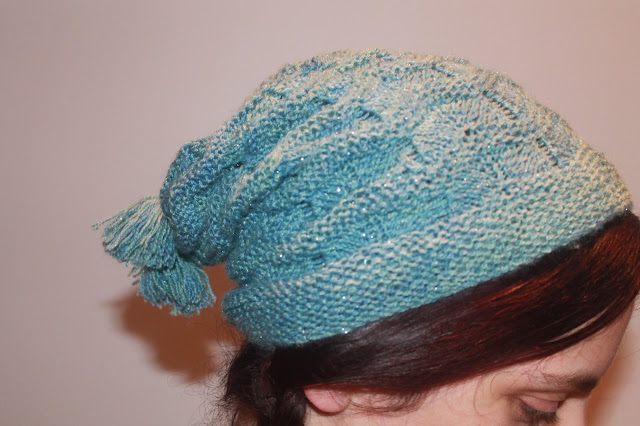 This pattern is really simple and was very quick to knit, and I love the zig-zag rows of reversed stocking stitch. Although I stated in a fairly recent post that I wasn't that keen on tassels I decided that this hat looked a little lost without them. 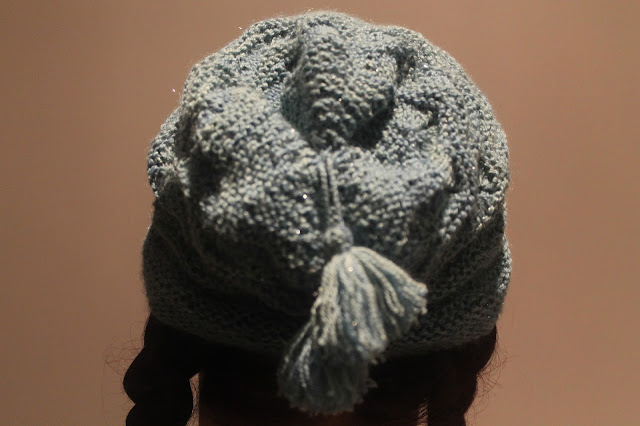 So, after two failed attempted I've now made a project I'm happy with and I'm all ready for the winter weather! Well, maybe not all ready but I think I'm got enough yarn left over for some matching mittens.
Labels: Dublin Dye yarn failures finished projects hats Knitting