Some of the ladies in the Rathmines Knitting Group thought it would be a good idea to have a crochet-a-long on Tuesday nights so we could all improve our crochet together. We selected a pattern on ravelry, Klamath Shawl, and all agreed to bring along some yarn and a hook on Tuesday to start. Unfortunately, it was all down hill from there ...

A combination of a lack of experience, confusion of terms - English or American stitches? and, I think, a not entirely clearly written pattern and we were rather at sea! Several budding crochets were entirely put off, while one or two more struggled on, I managed about 6 rows of the pattern. I gave up entirely on the written pattern and changed to the chart which I found much easier. 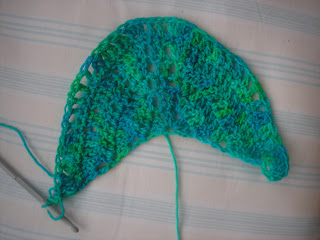 Unfortunately, after all that work I don't really like what I have produced. I think the problem is the texture of the shawl is too dense, I'd like it to be a bit lacier and lighter. I did however, for the first time really enjoy the process of crochet, which as I have mentioned before has not always been the case! So I have decided that I will preserver with my attempts to crochet a shawl, just not this one. I've searched ravelry for a pattern to use with the same wool (Colinette Jitterbug) and decided on the Elise Shawl. So fingers crossed that my new found love of crochet continues!
Labels: crochet wip